Deprecated: Array and string offset access syntax with curly braces is deprecated in /home/expositionintern/public_html/zlib/Formr.class.php on line 347

Deprecated: Array and string offset access syntax with curly braces is deprecated in /home/expositionintern/public_html/zlib/Formr.class.php on line 353

The man behind the project

For over 40 years, Jean-Guy Sylvain, long-time resident of Levis and inspirational entrepreneur, has been the man behind many visionary projects. He is known to put his heart and his soul into each to ensure their success. Not willing to back down for any reason, he's driven by challenge. Having revitalized over twenty hotels in Quebec and Florida, and more recently having acquired the Hotel Le Concorde Québec and participated in its transformation, Mr. Sylvain also owns the Hotel Ambassadeur Québec and the Hotel Universel Québec.

Because he is ambitious by nature, when the financial crisis hit the United States’ housing market a few years ago, Mr. Sylvain acquired a property that was experiencing financial difficulty. From there he began the construction of the Aztec RV Resort, a luxury holiday resort offering lots for sale or rent for motorhomes. As is often the case with his projects, this venture is now prosperous and profitable and was recognized as one of the nicest parks in North America.

His most recent project, Unilofts Québec, is a new take on residential lodging that aims to compete with illegal housing in the city of Quebec. These new urban lofts are equipped with kitchens and are available for rent in the heart of Sainte-Foy.

Last but not least, Jean-Guy Sylvain’s passion for antique cars led him to develop a large-scale car show that had outstanding success. His event included a spectacular showroom full of vintage cars featuring more than fifty vehicles and a garage specializing in the restoration of antique cars. Mr. Sylvain is a master of every project that he undertakes. His ambition and his drive are limitless!

When the International Levis Auto show held its first Classic Thursdays, there was an incredible amount of interest.

Classic Thursdays were weekly gatherings open to anyone who is passionate about classic cars! Every week, hundreds of exhibitors and visitors get together in St-Étienne with the idea of sharing their love of vintage cars. From June to August, these car lovers are invited to show off or admire beautiful cars and participate in a large-scale auction in September. Entertainment, food and presence prizes; it’s an event that you just can’t miss out on! Gaining more and more popularity, there were no less than 7 Classic Thursdays that took place in the summer of 2016! The season ended with flying colours thanks to the first annual Lévis International Auto Show!

The International Levis Auto Show is THE largest gathering of cars enthusiasts (classic cars and newer models) in the Quebec City area! It first took place in September 2016 and was a huge success. Having attracted hundreds of exhibitors and thousands of visitors, the International Levis Auto Show's mission was to bring together vintage car lovers while promoting the city of St-Étienne-de-Lauzon and the South Shore of Quebec City as well a increasing its economic prosperity. This eco-friendly event promise to be respectful of the community.

"Hold the largest auctions in Canada on an annual basis, and hold them here, in our beautiful province."

"Our hope is that these auctions become notorious and unique in Quebec!" 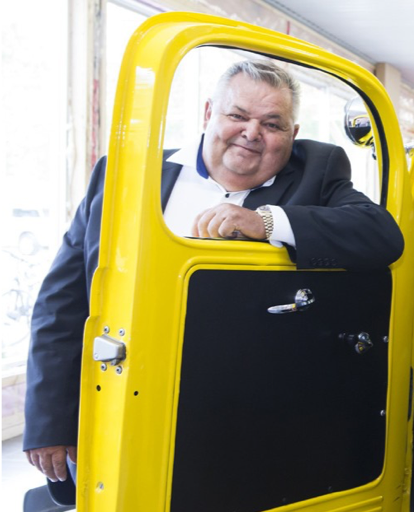